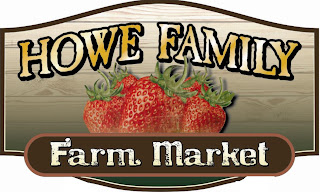 A new season and a new generation are bringing changes to the Howe Family Farm Market, to the benefit of food lovers and tourists in Elgin County.

The first of June marks the opening of the third season for the market just south of the Town of Aylmer at the corner of John Wise Line and Rogers Road. After many years of selling strawberries, melons, cantaloupe, pumpkins and squash at a roadside fruit stand, the Howe family opened their market in June 2010 to sell their produce as well as products from other local growers in Elgin County.

Opening the market was Ryan Howe’s idea. He and his brothers Rick and Kevin are the fifth generation of farmers in the Howe family dating back to 1861, when William Howe came from England and settled on John Wise Line.

Ryan and his wife Jill recently had their first child and are busy helping new grandparents Glenn and Monica Howe to prepare for the new selling season and expansion into Elgin County’s agri-tourism industry. This spring Kevin completed an agricultural degree from the U of Guelph and is managing and expanding the greenhouse operation. Rick is pursuing a separate career, but contributes to the farming business whenever he can and where ever he is needed.

Monica, who retired last year as an elementary school teacher, recalls the origins of the market.
"Ryan is a graduate of the agricultural program at the U of Guelph. When he came home he had some ideas for expanding the farming operation."

"I always had a thought in the back of my mind that it would be wonderful to have a market," Monica smiles. "One day four or five years ago Ryan took me out for a drive and said, ‘Mom, here are some ideas I have for the market’ and showed me some buildings and greenhouses. I was really excited about that."
"In the spring of 2010 we built our market, which took the place of the little stand we had on the hill. In 2011 we built the greenhouse attached to it."

This year the Howes will deepen their involvement with Elgin County’s agri-tourism industry by joining the Savour Elgin Culinary Trail and Ontario Harvest organizations. They are already listed in the Experience Elgin County and St. Thomas Virtual Tour Guide (
www.elgintourist.com/Tourism/Virtual-Tour-Guide, page 30).

There’s constant visitor activity during the growing season, which lasts until early November. The farm – officially G & M Howe and Sons Ltd. – produces several varieties of strawberries, each with their own specific characteristics such as flavour, size, texture and colour. The farm also grows a wide variety of other fruits and vegetables.

Rich sandy loam, spring-fed ponds and an efficient drip irrigation system add to the quality of the crops. They are sold to grocery stores all over southwest Ontario, but now the advent of the market has extended the farm’s reputation far beyond provincial boundaries.
"People come from all over the world to camp at Port Burwell Provincial Park and Springwater Conservation area, and they come here day after day to get fresh produce," Monica says. "Having the market and selling directly to people is a very rewarding experience." 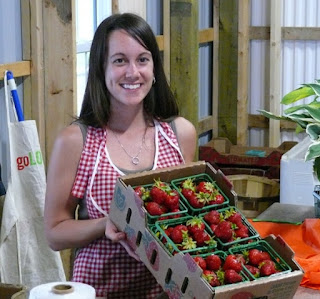 Posted by Elgin County Economic Development at 15:46 No comments:

An excellent way to get to know the flavours of Elgin County is to attend the London Wine & Food Show. The show will take place in the Progress Building at London's Western Fair on January 10 -12, 2013.

Over 10,000 people will attend this exciting event, and a significant portion of the show’s floor space will be taken up by the Elgin County display.

Visitors to the Elgin display will enjoy lively music, decorations in a western theme, and delicious samples created by some of the area’s finest restaurants, wineries and food producers.

With a generous helping of food connoisseurs and wine experts, tasting seminars, cooking demonstrations, sampling opportunities and informative exhibits the London Wine and Food Show is certain to satisfy your appetite.